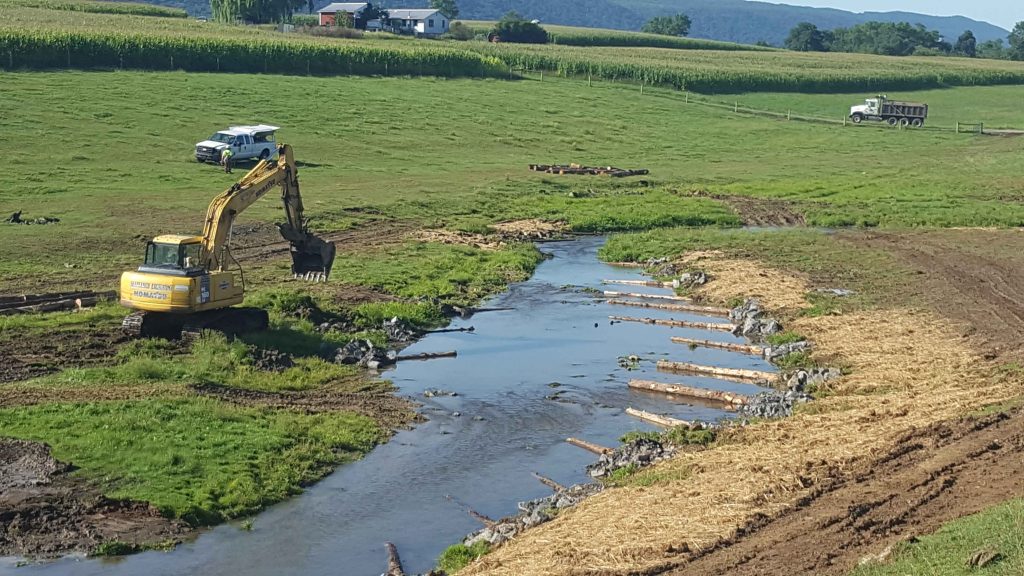 The Mifflin County Conservation District completed three fish habitat projects in the Upper Kish Watershed this summer with help from the Pennsylvania Fish and Boat Commission (PFBC) and funding from the National Fish and Wildlife Foundation (NFWF). These projects are part of ongoing efforts to restore the streams in the Upper Kish watershed from multiple impairments. Fish habitat has become an important focus for the District, working together with the PFBC Habitat Division and the Penn’s Creek Chapter of Trout Unlimited to improve the cold water fisheries of Mifflin County.

The Upper Kish Watershed has received restoration efforts for almost two decades. In recent years, the District has prioritized stream conservation projects that are comprehensive and address as many environmental concerns as possible. One of those concerns is a lack of fish habitat. Recent surveys completed in 2015 by the District and Susquehanna University show a lack of cold water game fish species, such as brook, brown, and rainbow trout. Despite yearly stocking efforts, few of these species have been able to over-season or remain in streams from year to year. A key reason is the lack of instream habitat. The key building blocks for good fish habitat are woody debris and instream boulders or cobble. In the case of woody debris, most of the trees were removed from streamside areas in this watershed, which leaves little material to create cover for fish. The streams in the Upper Kish also suffer from high embeddedness, or sediment load. Most of the large instream rocks, boulders, or cobble, are buried in deposits of fine sediment. This is problematic for fish reproduction as well as for the survival of their main food source…aquatic insects or macroinvertebrates.

So what are the Conservation District and partners doing about it? One solution is the installation of fish habitat structures. These structures create cover for fish as well as change the water flow. Certain structures accelerate and redirect water to clean out gravel and cobble of fine sediment. Other structures redirect water to encourage scouring of deep pools where fish can hide.

The District has installed a total of 7 projects in the Upper Kish with fish habitat improvement structures. The hope of these projects is that they will help to increase the number of cold water fish living in these streams. While the District and its partners have set out on a daunting task, recent evidence shows that efforts are paying off. In 2016, the PFBC found evidence of reproducing wild trout in one of the Upper Kish streams. The Little Kishacoquillas Creek was recently listed as a wild trout fishery, with evidence of naturally reproducing wild trout. Additionally, yearly surveys of aquatic macroinvertebrates have been showing promising results. In 2019, surveys revealed some of the best macroinvertebrate taxa richness scores since the sampling began in 2014.

“This material is based on work supported by the U.S. Environmental Protection Agency and the Chesapeake Bay Program’s Innovative Nutrient and Sediment Reduction grants program, which support efforts with the Chesapeake Bay watershed to accelerate nutrient and sediment reductions with innovative, sustainable, and cost-effective approaches.”